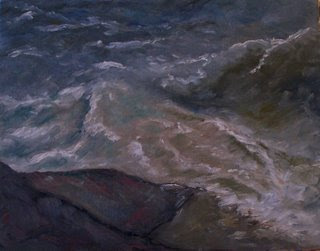 Pretty stupid and needless death I would say.

Pretty stupid for all of them to go out there on the jetty.

CC man taken by surge presumed dead
Lynn Brezosky - Express-News
A 19-year-old Corpus Christi man was presumed drowned after storm surge from Hurricane Ike swept him from a jetty, Corpus Christi Police Chief Bryan Smith said.
Smith said Michael Moxley and friends were out on a jetty, which is a rocky sea wall, along the Packery Channel, when the wave knocked Moxley under.
His friends said they last saw him in the water but not moving.
"We haven't found him," Smith said. "We can't call him dead yet ... but it's not looking good."
Friends who tried to save him ended up being rescued themselves. One's back was broken when the violent swells knocked him against the rocks. He was airlifted to an area hospital. Others were "banged up" with minor injuries, Smith said.
A Coast Guard search for Moxley so far has proved fruitless, Smith said.
Posted by Sam at 6:11 AM