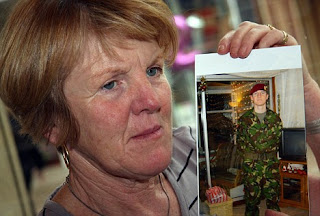 This is insanity.
Why would this hotel have this policy?

Soldier forced to sleep in car after hotel refuses him a room
Hannah Fletcher: The Times

A hotel that refused an injured soldier a room, forcing him to spend the night in his car, was backed into issuing a grovelling apology yesterday after receiving a barrage of abusive phone calls.

The Metro Hotel, in Woking, Surrey, called the police as its phone lines were flooded with angry and threatening calls from the public.
The attack on the switchboards came after it emerged that Corporal Tomos Stringer, 24, had been told that it was company policy not to accept members of the Armed Forces.

A soldier since the age of 16 and veteran of multiple tours in Northern Ireland, Iraq and Afghanistan, Corporal Stringer had travelled to Surrey to help with funeral preparations for a friend killed in action.

The corporal, who was not in uniform, presented his warrant card when asked by the hotel for proof of identity. After being refused a room, he had to bed down in his car, with his wrist, broken during a convoy ambush, encased in plaster.

Corporal Stringer’s MP, Hywel Williams, Derek Twigg, the Defence Minister, and Bob Ainsworth, the Armed Forces Minister, have all written to the hotel. After a resolute silence, the hotel, owned by a company called American Amusements, finally issued a statement: “The Metro Hotel, Woking, sincerely regrets any upset caused towards Corporal Stringer and his family . . .

The hotel management has always had an open-door policy to all its visitors and guests, including members of the military and Armed Forces.” The receptionist had made a mistake, it added.

Corporal Stringer, of 13 Air Assault Support Regiment, The Royal Logistic Corps, has returned to Afghanistan. His mother, Gaynor Stringer, from Criccieth, North Wales, told The Times: “I’m very, very angry. It’s discrimination. They would never get away with it if it was against someone of ethnic origin.”

She added: “In America, they treat soldiers as heroes. We went to Disney World with Tomos and the whole family was moved to the front of the lines. Everybody was clapping and cheering. Here, soldiers can’t even get a bed for the night.”