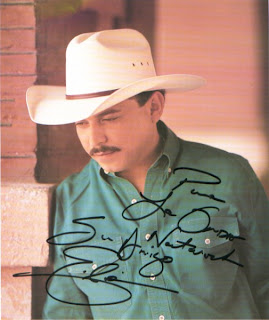 Man, if it weren't for bad luck he'd have no luck at all.

Displaced frm his rehab center in Houston because of Hurricane Ike, he comes here and gets into another wreck.

It's been seven months since Emilio Navaira crashed his tour bus on a Houston highway. Now he's once again back in the hospital.
The Tejano star has been involved in another accident, this time in San Antonio.
Emilio's agent, Joe Casias, says Emilio and his wife, Maria, were on their way home from rehabilitation. He was attending rehab in Houston, but was moved to San Antonio because of Hurricane Ike.
As Maria was driving them home, the couple got into an accident around 5:30 p.m. at Culebra and Potranco. An eyewitness said a truck was trying to turn from the middle lane across three lanes of traffic.
Maria didn't see the truck and hit him head-on. The eyewitness said the truck driver was fine,
but both Emilio and his wife were taken by ambulance to University Hospital. They are both in stable condition.
Casias says this brings back bad memories. About six months ago, Emilio crashed his tour bus and went through the window. He suffered a brain injury and has been in rehab ever since.
Casias said tonight he is thanking God that both Emilio and Maria are fine.
Posted by Sam at 7:27 AM