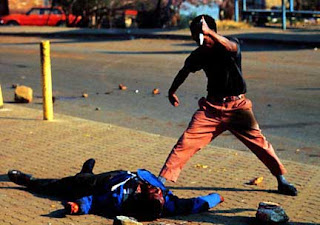 Another case of rampant testosteronism.

Is that even a word?

Stabbing charge upgraded to murder
David Saleh Rauf - Express-News
A 45-year-old man accused of fatally stabbing a man during a fight last week in Northeast Bexar County was charged today with murder, according to county records and an arrest warrant affidavit.
Terrell James Blue was arrested and charged Thursday with aggravated assault with a deadly weapon following a heated dispute with 42-year-old Stephen Martin in which Blue is alleged to have stabbed Martin three times in the lower left side of his back, according to the affidavit.
Martin later died from the injuries, according to the Bexar County Medical Examiner's Office.
On Friday, Bexar County Sheriff's investigators issued a murder arrest warrant for Blue to upgrade his previous charge. He was charged Sunday with murder by a county magistrate and remained jailed on $100,000 bond, officials said.
The fatal altercation broke out around 5 p.m. Thursday, when Blue went looking for his girlfriend at Martin's house in the 7000 block of Glen Mist. The affidavit alleges Martin and the woman were inside the residence smoking crack when Blue, after jumping Martin's fence, started knocking loudly on the front door.
Armed with an axe handle, Martin responded by yelling at Blue, referring to the disrespect caused by jumping his fence, and Blue responded by telling Martin he wasn't there for respect, the affidavit said.
“My woman is in there,” Blue told Martin, according to the affidavit.
After a brief argument, Martin chased Blue to the intersection of Glen Mist and Glen Pass, where Martin swung the axe handle at Blue several times but missed, the affidavit said.
A fistfight ensued when Martin slipped and dropped the axe handle. After Blue landed several blows to Martin's face, the fight was temporarily quelled, the affidavit said. But at some point during the dispute, Martin allegedly struck Blue's girlfriend.
In turn, Blue pulled out a kitchen knife, chased Martin toward his residence, caught up with him and repeatedly stabbed him, the affidavit said.
After being stabbed, Martin picked up his axe handle and returned home. He was transported to Brooke Army Medical Center where he died two hours later.
Posted by Sam at 5:59 AM