When you're sleepy pull over 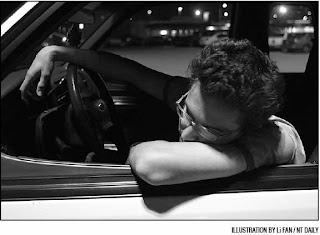 The bubbly always makes him sleepy.

Its never a good idea.

A burglar who pinched a bottle of expensive champagne to celebrate after stealing money and jewellery was caught after he parked his car to sleep it off.

Police were called out by worried passers-by who saw the 37-year-old man slumped behind the wheel of a car at the side of the road in Dusseldorf, Germany.

Officers who woke him up checked his ID and found he was wanted for a string of robberies.
A police spokesman said: "The officers couldn't believe their luck when they found out who he was.

"He even had the stolen goods from his latest robbery with him in the car. And we can also got him for drunk driving as well."
Posted by Sam at 6:16 AM