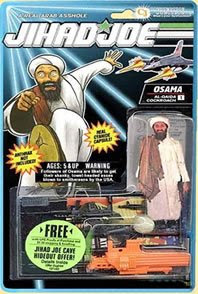 Wow, Al-Qaeda recruiting on the Internet.

Will we see TV commercials and toys next?

Saudi Arabia said on Wednesday it has arrested five people who used the Internet to propagate extremism and incite youths to go to troubled areas, a reference to supporters of Al-Qaeda.
Each of the three Saudis and two foreign residents used various aliases to promote "misleading propaganda through the Internet and ... incite young generations and facilitate their departure to areas of sedition," the interior ministry said, apparently referring to places like Iraq.
The terminology used in the statement, which was carried by the official SPA news agency, suggested that the five were supporters of Al-Qaeda, whom Riyadh has been battling since they launched a wave of attacks in 2003.
Such Internet users are usually referred to as "jihadis" on Islamist militant websites.
The group members "hid behind their computers and gave themselves several assumed names" in order to post material under one alias and post support for it under a different alias, the ministry said.
The aim was to give the impression that their ideas "enjoy support from society and to encourage those deluded (by the propaganda) to communicate with them as a prelude to recruiting them for their despicable goals," it added.
The statement listed some of the aliases used, including "emir (prince) of the slaughterers," "mujahed (holy warrior) lion," "father of Islam" and "Chechen mujahed".
Saudi authorities periodically announce the arrest of scores of Saudi and foreign Al-Qaeda suspects and the thwarting of plots to attack targets, including oil facilities in the kingdom, the world's top crude oil exporter.
Officials and experts told AFP this week that Saudi Arabia has largely neutralised suspected Al-Qaeda militants but that they cannot be written off so long as their ideology is alive.
"Security forces have managed to bring the situation on the ground under control and have so far succeeded in foiling Al-Qaeda's plots in the kingdom," said interior ministry spokesman General Mansur al-Turki.
"But this does not mean that Al-Qaeda is finished. Al-Qaeda still seeks to propagate its thinking and recruit youths in and outside the kingdom," he told AFP, echoing the cautious view often voiced by officials.
Posted by Sam at 5:48 AM