Mayor, there's a light at the end of the tunnel, hopefully its a train 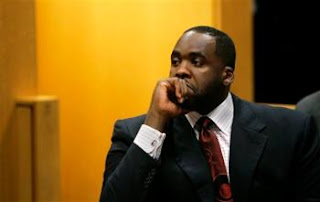 So even the attorney for the Detroit City Council urges the Governor to remove the Mayor.

Gutsy; maybe there is some hope for the aging beauty of the great lakes.

DETROIT (AP) — A lawyer for the City Council urged Michigan's governor at an extraordinary hearing Wednesday to remove Mayor Kwame Kilpatrick from office, accusing the mayor of lies and a cover-up that have "gravely wounded" the city.
A lawyer for the mayor called the council's allegations "an Olympic effort to contort the truth."
The historic session called by Gov. Jennifer Granholm, under her constitutional authority to remove elected officials for misconduct, came a day after Kilpatrick's lawyers failed to persuade courts to block the hearing. They filed an appeal Wednesday with the Michigan Supreme Court, but there was no response from the justices.
Members of the public lined up as early as sunrise to attend the hearing in a state office building. Only 18 were admitted.
Kilpatrick, in office since 2002, skipped the event. A spokeswoman said he was working on city business. He also faces felony charges in criminal court.
City Council says it was misled when it approved an $8.4 million settlement last year with fired police officers. Council members say they didn't know the deal carried secret provisions to keep a lid on text messages between Kilpatrick and Christine Beatty, who was his chief of staff, on city-issued pagers.
A lawyer for the council, William Goodman, told the governor that agreement was the product of an "incredible pattern of deception and nondisclosure."
"It was settled to cover up the truth. It was fast and it was rushed," he said.
"These are not minor transgressions, Governor Granholm. They have brought this city to a grinding halt," Goodman said.
"Be assured this city has not been killed yet, but it is gravely wounded and the mayor must be removed," he said.
In an opening statement, the mayor's attorney, Sharon McPhail, said the effort to oust Kilpatrick was politically motivated and urged the governor to resist calls to fire him.
"What you will be left with is this: Are you willing to twist these impermissible inferences in an Olympic effort to contort the truth to please the political forces that underlie this effort to remove the mayor?" McPhail asked.
She said it was city lawyers who settled the case with former police officers, not the mayor.
"It's too stupid to be plausible" that Kilpatrick came up with a secret pact to cover up embarrassing text messages, McPhail said.
Michigan governors have a constitutional authority to remove elected officials for misconduct, but the target never has been the leader of the state's largest city. The hearing is expected to last several days.
The hearing is likely to run for a few days. Granholm, a Democrat like Kilpatrick, opened the session by pointing out that it is neither a criminal nor a civil trial and doesn't share their rules of evidence. "The burden of proof is sufficient evidence satisfactory to the governor," she said.
Granholm has pared the case to two issues: Did Kilpatrick settle the lawsuits for personal gain because he feared release of the text messages? Did the mayor conceal information from the City Council?
The first witness was a contracts expert, Peter Hammer, a professor at Wayne State University Law School.
Hammer said the settlement with former police officers appeared to have been chopped up into three different parts, including a confidentiality agreement. "This whole confidentiality is for private purposes," he said in support of the council's assertion.

(Disclaimer, I went to Wayne State University for undergraduate school in geology)
The removal hearing is just one of three legal minefields for Kilpatrick. He also faces 10 felony charges in two cases in Wayne County Circuit Court.
After the Detroit Free Press published the text messages earlier this year, Kilpatrick and Beatty were charged with perjury, conspiracy, misconduct and obstruction of justice.
They are accused of lying during the 2007 whistle-blowers' trial about having an extramarital affair and their roles in the firing of a deputy police chief.
Two assault charges against the mayor stem from a confrontation in July. A sheriff's detective says Kilpatrick shoved him into another investigator as they were attempting to serve a subpoena on a friend of the mayor for the perjury case.
Posted by Sam at 3:33 PM