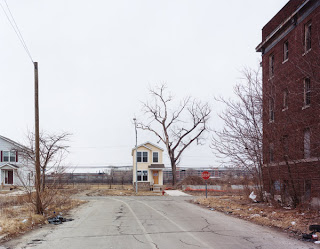 The Mayor is copping a plea and will Detroit ever recover?
Probably not. Look at it its like a thrid world country run by third world thugs. Sorry.

DETROIT — Kwame M. Kilpatrick, the charismatic mayor of Detroit who has been embroiled in legal problems stemming from a sex scandal since the beginning of the year, pleaded guilty to obstruction of justice and agreed to resign Thursday morning as part of a deal with prosecutors.

He agreed to plead guilty to two felony counts of obstruction of justice, pay restitution to the city of $1 million, give up his law license, forfeit his state pension and serve 120 days in the Wayne County jail. His resignation is to take effect within 14 days. All other charges were dismissed, and the judge scheduled sentencing for Oct. 28.
“He understands fully the agreement and agrees to be bound by it, judge,” a lawyer for Mr. Kilpatrick, Gerald Evelyn, told Wayne County Circuit Court Judge David A. Groner.
Judge Groner asked Mr. Kilpatrick, “Is this something you are ready to do today?” He added, “Do you have any questions?”“I have no questions about what’s going on today,” Mr. Kilpatrick told Judge Groner. Later, he said, “I lied under oath.”
Mr. Kilpatrick had been facing 10 felony charges in two criminal cases that involved allegations of perjury and assault. Despite being under pressure for to step down for months, Mr. Kilpatrick, 38, clung to his office, even telling residents in a live television appearance, “I will never quit on you. Ever.”
His refusal to resign delighted a certain segment of this city’s mostly poor, mostly black population, who felt pride in Mr. Kilpatrick’s rise from the Detroit public schools to the mayor’s mansion. But others here found Mr. Kilpatrick arrogant and stubborn. Some of his most loyal supporters turned on him in recent weeks, angered to see Detroit dragged through a long and tawdry affair that distracted the region from more pressing matters in a time of serious economic trouble in Michigan.
In contrast to his recent court appearances, in which he seemed defiant and jovial, Mr. Kilpatrick, a former college football star, walked into the small courtroom where he took the plea looking dejected. He hugged his lawyers and seemed to be fighting back his emotions.
As he answered questions from the judge in the case, however, he smiled occasionally and joked.
The president of the Detroit City Council president, Kenneth V. Cockrel Jr., will take over as mayor. Mr. Cockrel’s late father was a prominent political figure in Detroit, and his stepmother, Sheila M. Cockrel, is also a member of the council.
Despite the legal closure for Mr. Kilpatrick, many people in Detroit see his departure as the beginning of a new chapter of challenges for the city. The council does not have a reputation for working well together, and the F.B.I. is investigating whether illegal payments were made in one of its recent multi-million dollar contract approvals.
How the city will be governed in the immediate future is an open question. “It will be a long time before anyone can say we recovered from this crisis and are fully back on track,” said John R. Chamberlin, a professor at the Gerald R. Ford School of Public Policy at the University of Michigan. “It will be measured in months and years, not weeks.”
The city government became progressively more paralyzed as the scandal surrounding Mr. Kilpatrick played out in headlines and courtrooms over the past eight months, stemming mainly from the revelation that the mayor had conducted an extramarital affair with an aide and from his efforts to keep the affair secret.
He was accused of forcing three police officers out of their jobs, and then, when they sued the city over their dismissal, of using $8.4 million in public funds to, in effect, buy their silence, by settling the suit on favorable terms before the affair could be disclosed in court testimony.
The affair became public anyway, when The Detroit Free Press published steamy text messages sent from a city-owned pager that detailed much of the romance between Mr. Kilpatrick and the aide, Christine Beatty, his chief of staff. The messages and the affair contradicted testimony that both Mr. Kilpatrick and Ms. Beatty had given under oath last year.
Mr. Kilpatrick, a two-term mayor who had brimmed with promise early in his career, was charged with eight felonies including perjury and misconduct in office. Ms. Beatty, who was also charged with felony counts, resigned in January.
Earlier this month, the Michigan attorney general, Mike Cox, charged Mr. Kilpatrick with two more felony counts, this time of assault against police officers. According to Mr. Cox, the mayor interfered with the officers, shouting and shoving, as they tried to serve a subpoena on one of his friends.
The Detroit City Council, which has no power to remove the mayor, voted to censure him and to request his resignation; in May, after Mr. Kilpatrick refused, the council asked Gov. Jennifer M. Granholm, who does have that power, to intervene. Governor Granholm scheduled a hearing on the issue that began on Wednesday after court challenges by Mr. Kilpatrick’s lawyers failed to block it.
Both Mr. Kilpatrick and Ms. Granholm are Democrats, as are all the members of the city council.