WWDCD? (What would Davy Crockett do?) 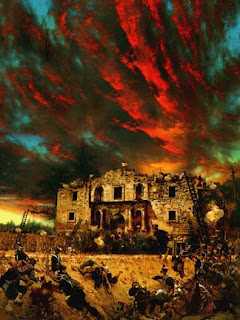 Well, I wondered, what is a "priceless" artifact from the siege of the Alamo doing on display in a hotel, rather than in a museum or the Alamo itself.

Now the "priceless" artifact has a no questions asked price. When before, no one would probably have touched it because what are you going to tell that person? Hey here is a cannon ball from the Siege of the Alamo you can purchase? and No, its not the one reported stolen?

Now a market has been created.

A cannonball stolen Sunday is a priceless object to historians, but the owner of the hotel where it was swiped has put a price on its return.
Robert D. Tips, owner of the Fairmount Hotel, is offering a $5,000 reward in exchange for the Battle of the Alamo artifact that archeologists dated to 1836 and linked to Santa Anna’s army.
“Right now I will pay this reward with no questions asked,” Tips said. “There’s gonna be someone else out there who knows where this thing is.”
Tips and his associates have been scouring online auction Web sites for a softball-size cannonball matching the description of the artifact that had been displayed in his hotel for 23 years.
Police said the object was stolen from a plastic display case in the hotel at 401 S. Alamo St. sometime Sunday night or Monday morning.
Posted by Sam at 7:40 AM