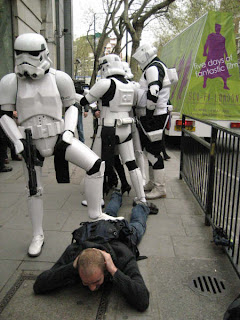 Suspect flees to police academy
From the people who brought you such stock photos as 'Police Tape', comes 'Police Car'
When a crime has been committed, where do you go? To a police station, of course, or if there's none around, a police training centre.
However, that is only if you have witnessed a crime. If you may have committed the crime, then going to these places may not be the best idea.
In Dumb Criminal world though, anything is possible.

A man suspected of robbing a petrol station in the US was arrested when he ran into the Ohio State Highway Patrol training centre.
Police said two men robbed the petrol station, before fleeing the scene in a pickup truck.
When an officer spotted the vehicle later, he pulled it over, only for the passenger to make a break for it. The driver surrendered to police.
The passenger ended up running into the police training academy, where he was arrested.
"That is a little comical," said Columbus police Sgt. Greg Bodker.
"One of the officers was directly behind the suspect who fled on foot so I don't believe he would have gotten in there, but he did get to the porch and attempt to open the doors."
Posted by Sam at 6:24 AM