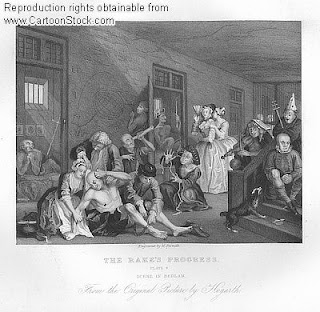 Don'tcha just love the way the Chinese treat their citizens? Makes one glad to live here with all of freedom's warts and all.

Whistleblowers sent to mental ward, Chinese paper says
By Andrew Jacobs
BEIJING: Local officials in Shandong Province have apparently found a cost-effective way to deal with gadflies, whistleblowers and all manner of muckraking citizens who dare to challenge the authorities: dispatch them to the local psychiatric hospital.
According to an investigative report published Monday by a state-owned newspaper, public security officials in Xintai city have been institutionalizing residents who persist in their personal campaigns to expose corruption or to protest the unfair seizure of their property. Some people said they were committed up to two years, and several of those interviewed said they had been forced to consume psychiatric medication.
The article, in The Beijing News, said most inmates had been released after they agreed to give up their causes.
Sun Fawu, 57, a farmer seeking compensation for land spoiled by a coal mining operation, said he was seized by the local authorities on his way to petition the central government in Beijing and brought to the Xintai Mental Health Center in October.
During a 20-day stay, he said he was tied to a bed, forced to take pills and given injections that made him numb and woozy. When he told the doctor he was a petitioner, not mentally ill, the doctor reportedly said, "I don't care if you're sick or not. As long as you are sent by the township government, I'll treat you as a mental patient."
In an interview with the paper, the hospital's director, Wu Yuzhu, acknowledged that some of the 18 patients brought there by the police in recent years were not deranged, but he had no choice but to take them in. "The hospital also had its misgivings," he said.
Although China is not known for the kind of systematic abuse of psychiatry that occurred in the Soviet Union, human rights advocates say forced institutionalizations are not uncommon in smaller cities. Robin Munro, the research director of China Labour Bulletin, a rights organization in Hong Kong, said such "an kang" wards - Chinese for peace and health - are a convenient and effective means of dealing with pesky dissidents.
In recent years practitioners of Falun Gong, the banned spiritual movement, have complained of coerced hospitalizations and one of China's best-known dissidents, Wang Wanxing, spent 13 years in a police-run psychiatric facility under conditions he later described as abusive.
In one recent, well-publicized case, Wang Jingmei , the mother of a man convicted of killing six policemen in Shanghai, was held incommunicado at a mental hospital for five months and only released last Sunday, the day before her son was executed.
The Beijing News story about the hospitalizations in Xintai was notable for the traction it gained in China's constrained state-run media. Such Communist Party stalwarts as People's Daily and the Xinhua news agency republished the story, and it was picked up by scores of Web sites. At the country's most popular portal, Sina.com, it ranked the fifth most-viewed news headline and readers posted more than 20,000 comments by evening. The indignation expressed was universal, with many clamoring for the dismissal of those involved. "They're no different than animals," read one post. "No, they're worse."
Reached by phone on Monday, a hospital employee said Wu, the hospital director who voiced his misgivings to The Beijing News, was unavailable. The employee, Hu Peng, said local government officials had taken him away for "a meeting" earlier in the day and had also looked through patient records.
Although Hu said the hospital was not authorized to diagnose patients, he nonetheless defended the hospitalizations, saying that all the patients delivered by the Public Security Bureau were certifiably ill. "We definitely would not accept those without mental problems," he said.
Posted by Sam at 7:41 AM