Please call if you have any information 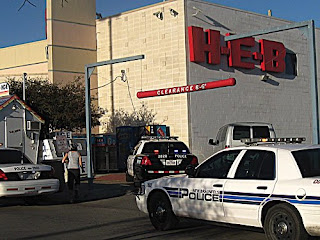 Kind of like lightning striking twice in the same place.
Relatively rare but it does happen.

If you have any information please contact the NBPD or CrimeStoppers at the numbers below.
Bank inside H-E-B robbed again
Ashlie McEachern The Herald-Zeitung
The International Bank of Commerce inside the H-E-B grocery store in New Braunfels was robbed Monday — the second heist at the location in two months.The suspect in the latest robbery, reported around 4:13 p.m., is a white female around 5 feet 7 inches tall, weighing 165 pounds with brown hair and glasses, according to the New Braunfels Police Department.
The Police Department released these details about the robbery at 9:29 p.m. after repeated inquiries from the Herald-Zeitung:
No weapon was used in the robbery, and the woman left with an undetermined amount of money. There were no injuries reported.
Officers continued the investigation, watching both exit points of the store until it was decided the suspect had vacated the premises. Detectives then were called to the scene. The police said they are continuing their investigation of the robbery and that any additional information will be provided as it is confirmed.
Monday’s robbery at the IBC follows another heist on Nov. 14 at the site off South Walnut Street.Police are continuing to investigate that robbery, which involved an unidentified male, and have released surveillance tape of the suspect, which can be found at www.crimeweb.net/details.asp?id=13891.
Officers at the scene of Monday’s robbery said the two crimes do not appear to be related.Police are asking that anyone with information about the two robberies to contact the New Braunfels Police Department at (830) 608-2185 or Crime Stoppers at (830) 620-TIPS.
Posted by Sam at 6:46 AM