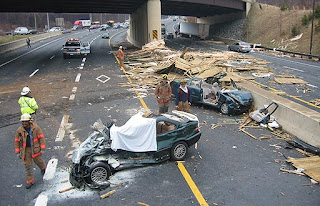 The DA pro-tem was appointed by the Court after our office recused itself due to a potential conflict of interest.

Needles said that if Hanly does not complete his probation, he could receive up to two years in state jail.Hanly was 18 in June 2007 when he and three friends were driving down windy, hilly Charter Oak Drive to rent a movie. According to Texas Department of Public Safety Cpl. Rick Alvarez, Hanly was driving too fast for the steep road conditions. He lost control of his 2000 Toyota Sienna mini-van, veered off the road, struck a tree, and his vehicle flipped over.

Megan Herring, 18, and Kayla Gage, 17, were both killed in the wreck. A third passenger, Alysse Ojeda, 16, was seriously injured and in critical condition at Brooke Army Medical Center in San Antonio for three weeks after the wreck.

The speed limit on Charter Oak Drive is 30 miles per hour, and Alvarez said Hanly was driving at least 50 miles per hour.Needles said a judge will hear Hanly’s plea on Feb. 5.
Posted by Sam at 6:48 AM