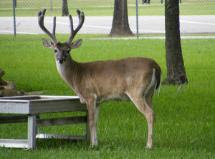 He must have really pissed off the Judge.

Maybe he should've passed the buck.

Bail increased for man accused of slaying ‘Mr. Buck'
By Brian Rogers - The Houston Chronicle
HOUSTON -- A judge increased the bail for Brandon Eugene Gregory and ordered that the man be taken back into custody Monday during his first court appearance on a charge of killing a beloved deer known to the Houston area as Mr. Buck.
State District Judge Don Stricklin did not specify his reasons in court for boosting Gregory’s bail to $15,000. The judge also ordered that if Gregory posts bail, he must remain at his residence under house arrest.
Gregory had been free since posting $5,000 bail on a charge of taking a wildlife resource without landowner consent. The charge is a state jail felony offense.
Officers arrested Gregory, 23, late Friday on accusations that he was responsible for decapitating Mr. Buck, a tame deer that visitors could pet at Bear Creek Pioneers Park’s wildlife sanctuary. Gregory’s attorney, Dan Kirby, said he had not spoken to Gregory in depth and didn’t know details about the allegations.
“It’s important to remember that there are two sides to every story,” Kirby said.
The November killing and mutilation of Mr. Buck shocked animal lovers across the Houston area. The eight- to 10-point buck was comfortable around people and let park visitors scratch his chin.