He always wanted a fire truck for Xmas? 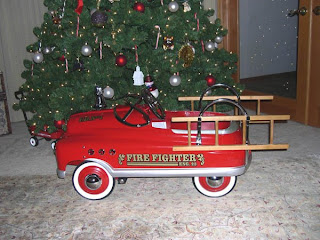 Why steal a fire truck to get home for Christmas?

He had a burning desire to go home and see his Mom for Christmas?

He was fired from his job and had no money?

He was in a fight and was stilled hosed off?

SOUTH SALT LAKE, Utah (AP) - What kind of mileage does that thing get? South Salt Lake police have arrested a man they say tried to steal a fire truck so he could drive home - to Washington - for Christmas.

South Salt Lake police Detective Gary Keller says firefighters on a medical call heard the $500,000 truck's air horn blaring and ran outside, where they found a man in the driver's seat trying to drive away.

After a lengthy struggle during which the engine traveled about 50 feet, firefighters were finally able to subdue the man until police arrived. Police say the 25-year-old man told them he wanted to travel to Washington to see his mother for Christmas.
Posted by Sam at 8:01 AM