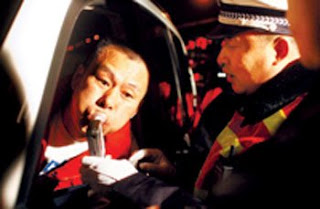 Drunk driving happens everywhere and the consequences are the same.

Lives ruined, families losing loved ones and the like.

It is not worth it. Drink at home or arrange to have a driver or call a cab.

Jackson sentenced to 12 years: DUI convict to serve 7 more years for killing cyclist with car
By Dionesis Tamondong • Pacific Daily News •
Kevin Michael Jackson in April pleaded guilty to vehicular homicide and two counts of driving under the influence with injuries. He admitted to being drunk when he crashed his sedan into Oberiano, 39, who was cycling with a group of friends along Route 1 in Piti two years ago today.
Superior Court of Guam Judge Arthur Barcinas suspended three years of Jackson's sentence, noting the defendant didn't have a prior criminal history. The judge also gave Jackson credit for time served, trimming about two more years from sentence.
Jackson also was fined $3,000 and ordered to complete 200 hours of community service, which the judge said must include speaking to the public about the dangers of driving while drunk. Jackson's restitution hearing is scheduled for March 20, 2009.
Before Barcinas imposed his sentence, Chief Prosecutor Phil Tydingco told the judge Jackson deserved the higher end of the 5- to 15-year range for the vehicular homicide charge.
"This was not a mere accident," Tydingco said, adding Jackson's tests showed he had a blood alcohol content of 0.13, above the legal limit of 0.08. "Every Christmas, (friends and family) can never forget what the defendant has done to this family. The children will never be able to spend Christmas with their father again."
Stephanie Taijeron, who was riding with Oberiano the morning he died, described how her friend's body was thrown about 10 feet in the air and landed on her. Jackson also hit two other cyclists.
"I can never forget that image," she said in court. "The scars you left were not just physical but psychological as well."
Jackson's mother, Cliftonya Ketchup, flew in from Georgia to speak on his behalf. She described her son as "a good kid" who always supported her and his siblings during tough times in their lives.
She asked the judge to sentence him fairly. Jackson was a sailor with the USS Frank Cable at the
time of the fatal crash, and Ketchup said she was aware that other military personnel have been involved in fatal crashes in recent years.
"I don't want him to be judged for what other soldiers have done in this community," she said.
Jackson will be eligible for parole after he serves two-thirds of his sentence.
Posted by Sam at 7:07 AM