A new Sheriff in town 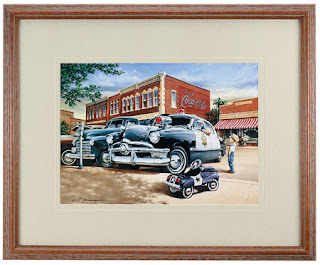 Former Texas Ranger picked as Hays Sheriff
By Roger Croteau - Express-News
SAN MARCOS — A former Texas Ranger was picked to lead the Hays County Sheriff's Department on Monday.
The Hays County Commissioners Court voted 4-1 to appoint Tommy Ratliff to succeed Sheriff Allan Bridges, who died unexpectedly Dec. 6.
“He's a good choice and somebody who can make us a fine sheriff,” Commissioner Jeff Barton said.
Barton said he wished Ratliff “had more managerial experience,” but he was confident that Ratliff would be a good choice.
Will Conley cast the lone vote against appointing Ratliff. Conley, the only Republican on the court, had publicly backed Chief Deputy Sherman Brodbeck for the post. Brodbeck also was the choice of Bridges' widow, Kathy, who left the courtroom in tears after the vote.
“If we go outside the department, it will be an insult to Sheriff Bridges,” Conley said.
He added that, as a Texas Ranger, Ratliff had never run a jail or put together a budget.
“I think we have better applicants to choose from,” Conley said.
He called the process the court used to select a new sheriff “an embarrassment to the county” that “lacked openness.”
Brodbeck said he is sure Ratliff will make a good sheriff and he hopes there is a smooth transition, but he added, “I think he (Bridges) would rather have had someone from within the department.”
Ratliff was a Texas Ranger for 21 years before retiring in August. The commissioners already had selected him to take over the Precinct 2 justice of the peace office next month, after Lamont Ramage retires. Now the court will have to find a new appointee for that office.
Ratliff will face an election in 2010 if he wants to keep the sheriff's job. He did not attend Monday's meeting.
Commissioner Karen Ford said Sheriff's Department employees should not worry that Ratliff will come in and make a lot of changes.
“I am confident Ranger Ratliff will abide by what he stated to me — that he does not intend to make any big changes, if any,” she said.
Bridges died after collapsing at home.
Posted by Sam at 6:47 AM