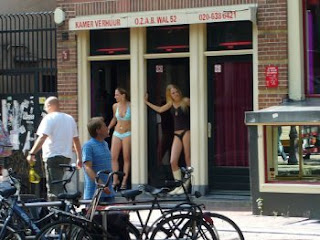 Drugs and prostitution can lead to organized crime?

I mean who knew?

Is this what going Dutch means?

Amsterdam to close many brothels, marijuana cafes
By TOBY STERLING

AMSTERDAM, Netherlands (AP) - Amsterdam unveiled plans Saturday to close brothels, sex shops and marijuana cafes in its ancient city center as part of a major effort to drive organized crime out of the tourist haven.
The city is targeting businesses that "generate criminality," including gambling parlors, and the so-called "coffee shops" where marijuana is sold openly. Also targeted are peep shows, massage parlors and souvenir shops used by drug dealers for money-laundering.
"I think that the new reality will be more in line with our image as a tolerant and crazy place, rather than a free zone for criminals" said Lodewijk Asscher, a city council member and one of the main proponents of the plan.
The news comes just one day after Amsterdam's mayor said he would search for loopholes in new rules laid down by the national government that would close marijuana cafes near schools citywide. The measures announced Saturday would affect about 36 coffee shops in the center itself - a little less than 20 percent of the city total.
Asscher underlined that the city center will remain true to its freewheeling reputation.
"It'll be a place with 200 windows (for prostitutes) and 30 coffee shops, which you can't find anywhere else in the world - very exciting, but also with cultural attractions," he said. "And you won't have to be embarrassed to say you came."
Under the plan announced Saturday, Amsterdam will spend euro30 million to euro40 million ($38 million to $51 million) to bring hotels, restaurants, art galleries and boutiques to the center. It will also build new underground parking areas.
Amsterdam already had plans to close many brothels and some coffee shops, but plans announced Saturday go further.
Asscher said the city would reshape the area, using zoning rules, buying out businesses and offering assistance to upgrade stores. The city has shut brothels and sex clubs in the past by relying on a law allowing the closure of businesses with bookkeeping irregularities.
Prostitution will be allowed only in two areas in the district - notably De Wallen ("The Walls"), a web of streets and alleys around the city's medieval retaining dam walls. The area has been a center of prostitution since before the city's golden shipping age in the 1600s.
Prostitution was legalized in the Netherlands in 2000, formalizing a long-standing tolerance policy.
Marijuana is technically illegal in the Netherlands, but prosecutors won't press charges for possession of small amounts. Coffee shops are able to sell it openly.
Posted by Sam at 6:59 PM