The gang that couldn't shoot straight 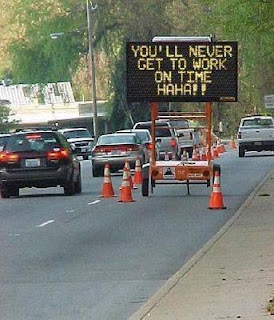 Oh Brother! First toll roads now this? Is the Texas Dept. of Transportation trying to send a message to the drivers in the SA area?

How ironic is this? The stuff that was sprayed to prevent cars from skidding and getting into accidents caused them.

Expect much legal chaos in the ensuing 2 years. BTW the first Mrs. Man o' Law wrecked my 1976 VW Rabbit because, while driving the car, she braked to stop on the freeway in Detroit and slid on the salt put down by the road crews to prevent accidents. No, we didn't sue anyone, we were just glad no one was hurt.

De-icing chemical cause of slick roads?
By Robert Crowe - Express-News
For hundreds of motor-ists whose vehicles slid across San Antonio's highways, slamming into other cars and guardrails and clogging traffic for hours Tuesday morning, it was as though they were driving on ice.
But the unusual number of wrecks — nearly 400 had been tallied by early afternoon — weren't caused by icy conditions. Instead, officials said a chemical, used to prevent slick roads during freezing temperatures, might have had an adverse effect.
“We just never know what weather conditions will be like in San Antonio,” said Laura Lopez, a Texas Department of Transportation spokeswoman. “The forecast called for ice on the roads, so we responded accordingly.”
Lopez, stationed in TxDOT's San Antonio office, said officials have to brace for the worst scenario.
“If we didn't do anything,” she said, “and ice begins to form, we would be in trouble.”
During a 12-hour period beginning about midnight, when TxDOT officials sprayed the highways with magnesium chloride in preparation for the hard freeze that never materialized, the flood of wrecks was recorded, many at the same location, such as U.S. 281 and Hildebrand and U.S. 281 near Grayson and Josephine streets.
No fatalities were reported Tuesday.
“We have responded to accident after accident since at least 3 o'clock this morning,” Sgt. Ernest Celaya, a traffic division officer, said at the scene of a midmorning wreck involving an SUV that skidded into a guardrail near U.S. Highway 90 and Interstate 35, where a fellow officer, demonstrating the conditions, slid across the road in his boots.
On average, authorities respond to about 120 minor collisions and 10 major wrecks each day; on Tuesday, call after call was placed — 309 calls for minor accidents and 86 calls for major ones — until about noon, said Sgt. Gabe Trevino, a spokesman for the San Antonio Police Department.
It quickly became apparent to traffic investigators that a slippery sheen at each scene may have been the chemical that TxDOT workers had sprayed with the very best intentions.
“It could be a combination of the existing oils on the road surface with the de-icing agent used,” Celaya said
Lopez said the transportation department placed chat rock — a type of crushed gravel — on ramps, overpasses and other wreck-prone areas. TxDOT has used magnesium chloride without incident in San Antonio for three years, and the chemical has been sprayed in other parts of the state for 10 years. For now, transportation workers will continue using the de-icing agent, Lopez said.
Other factors that contributed to the landslide of wrecks, officials said, include whether the lingering drought allowed oil to build up on roads. In isolated incidents across the country, magnesium chloride has been blamed for slick road conditions when the chemical combination absorbs moisture during spikes in humidity.
Colorado Springs officials in February attributed a number of accidents to magnesium chloride drawing moisture out of the air when humidity levels rose from 20 percent to 80 percent.
“We certainly will be willing to look at this isolated incident,” said Mark Cross, TxDOT's spokesman in Austin. “The elements can do tricky things when you use chemicals and can cause unexpected chemical reactions.”
Local National Weather Service forecaster Mark Lenz said humidity levels increased from 59 percent at midnight to 75 percent at 8 a.m. The increase of 16 percentage points, however, was about average for an overnight period, he said.
Drivers involved in wrecks said the slippery roads caught them by surprise.
John Perez's Ford Mustang crashed into an Interstate 35 retainer wall as he lost control while changing lanes to avoid another vehicle that veered in front of his car.
“I've been able to straighten my car on wet roads, but this was different,” the 18-year-old said. “It was real slick.”
Posted by Sam at 6:57 AM