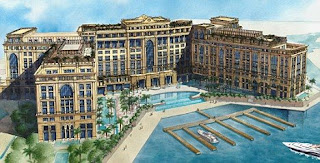 There's your money for the high price of gasoline.

However, the city's continued expansion will also add to its huge carbon footprint. Each person living in Dubai has a carbon footprint of more than 44 tons of CO2 a year.
Despite the environmental fears, Versace says the beach will be environmentally sustainable.
Soheil Abedian, president of Palazzo Versace, said: 'We will suck the heat out of the sand to keep it cool enough to lie on. This is the kind of luxury that top people want.'
A source added: 'The super rich want pure luxury. They don't want to walk on scalding sand.' (Hey! Don't go to the beach?)
A British firm, Hyder Consulting will oversee the project, and it is hoped the 10-storey hotel will help attract some of the 800,000 Brits who visit Dubai each year.
There is already one Palazzo Versace hotel, operating on Australia's Gold Coast, which has attracted the rich and famous. Fifteen more hotels are in the pipeline.
Posted by Sam at 7:32 AM