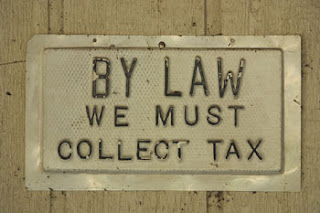 OMG, I'll be taxed to Death, if the Fat doesn't kill me first.


The Doctor Is In (Cyberspace)
NY Daily News

State Health Commissioner Richard Daines has become the point man for one of the more controversial of Gov. David Paterson's revenue-generating budget proposals: The so-called "fat tax" - an 18 percent levy on sugary drinks like non-diet soda.

Daines, a Spitzer administration holdover who generally keeps a fairly low profile, has recorded a YouTube manifesto in defense of the tax, which the administration insists is really more about health care policy than making money off soda-drinking New Yorkers.

The point, according to Daines, is to disincentivize sugary drinks, which research shows are the top culprit in the childhood obesity epidemic, and encourage people to return to 1970s-era levels of consumption of other, less fattening beverages like milk and water.

The side benefits, according to Daines, include the fact that cutting down on soda saves money for consumers and whittling the state's collective waistline could save money for taxpayers in the form of fewer obesity-related health problems that need to be treated - particularly for Medicaid recipients.

The Daines video is intended to be a response to last week's Q poll that found voters oppose the fax tax 60-37 percent.

It's unlikely Hollywood will come calling for the commissioner soon. Daines, a mild-mannered Mormon, isn't the most scintillating of spokesmen, and the topic is a tough sell. But he gets his point across with the help of some well-placed props - including a big, yellow gelatinous mass that's supposed to represent six pounds of human fat. Yuck.

Some have suggested that the state is unfairly picking on the soda industry and asked why, if this is indeed a policy initiative, the governor doesn't push things to their logical conclusion by taxing everything that's fattening - from Twinkies to french fries - or perhaps even adopt Assemblyman Felix Ortiz's proposal of cutting to the chase and taxing overweight people themselves.

Daines' response was quite Spitzeresque: Don't let the perfect be the enemy of the good. The commissioner also insisted he is neither surprised nor daunted by the Q poll's findings nor deterred by the "nanny state" arguments about keeping government out of people's personal lives.

"Simply because you can't or don't want to do everything doesn't mean you can't do the first thing or the most important thing," Daines told me during a recent interview.
"If you take a fair-minded look at the literature, you will see that the first and most important to do is to go after these beverages. We paralyze ourselves if we say we have to do everything at once or do nothing."