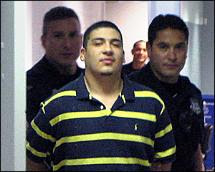 I hope a jury wipes the smirk off of this perp's face. and sends him to hell.

19-year-old charged in death of taco vendor
By Alejandro Martinez-Cabrera - Express-News
San Antonio Police arrested a man Thursday afternoon in the fatal shooting of a taco vendor earlier this month.
Rogelio Gomez, who turned 19 on Thursday, was arrested around 6 p.m. on a capital murder warrant in the Dec. 6 death of Pedro Nieto.
Nieto, 44, was shot in the chest in the parking lot of the Nassau Food Mart at Nassau Street and West Avenue. He died of his injuries the next day.
According to witnesses quoted in an arrest affidavit, Gomez went to the Nassau Food Mart with other three individuals on a beer run. Gomez got out of the vehicle with another passenger and told the passenger to get a taco first.
Gomez then pointed a gun at Nieto and asked him in Spanish for his money. Gomez shot Nieto once in the chest after the Nieto grabbed a knife from inside the van and seemed to approach Gomez.
A witness said that she heard a “big boom” and then “saw two males run away smiling as the complainant cried for help,” according to the affidavit.
Police did not say if they are currently looking for other suspects in connection with Nieto’s death.
Posted by Sam at 7:39 AM