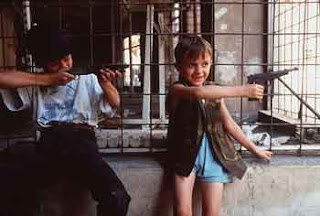 Let me make a guess here.

I bet alcohol played a part in this.

Men’s horseplay with shotgun proves fatal
Express-News -
An East Side man was charged with manslaughter after he pulled the trigger on a shotgun, killing a friend while the two horsed around Friday night, police said.
Gibran Estrada, 20, was killed about 11:40 p.m. at a home in the 4100 block of Sunrise Glen. The fatal shooting happened when Joseph Jake Santos, 20, was showing Estrada a newly purchased shotgun at Santos’ mother’s home, police said.
Estrada grabbed the gun, placed it under his chin and told Santos, “Shoot me,” according to a police report. Santos initially told police the men were “playing” when he loaded the gun with a single shell before Estrada shot himself.
Santos later told police that he reached over and pulled the trigger on the loaded gun while Estrada held it under his chin. Santos remains jailed on a manslaughter charged with bond set at $40,000.
Posted by Sam at 7:09 AM