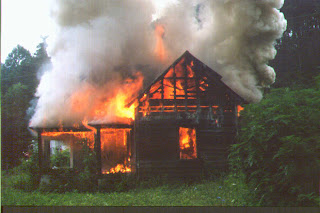 Deputies to search rubble for body
By Scott Sticker
CANYON LAKE — Investigators today will be poring over the scene of a Friday night fire that engulfed a residence after the homeowner claimed that buried in the ashes and debris would be a body.Firefighters from the Bulverde, Spring Branch and Canyon Lake fire departments responded to the 1400 block of Western Skies Drive in Canyon Lake after reports of smoke came in at about 5 p.m. Friday, fire officials said.

It is still undetermined what started the fire at the abandoned home, Deputy Fire Marshal Dave Padula said.“It’s too dangerous to work out here at night,” he said. “We will return tomorrow with a full investigation.”

Property owner Tim Swientek said Friday night that he believed there was a body burned up in the fire. Sheriff’s deputies at the scene, however, were quick to counter, saying the investigation was not complete.

Officials said the structure was 80 percent engulfed around 5:30 and that the fire was extinguished by about 7 p.m.The house had no electricity, as the property owners had Perdenales Electric remove the meters after they found someone living there without permission.They also said the windows of the house had been smashed in several months ago.For Swientek and his wife, Corinne, it was an emotional scene.

He said that though they had not lived at the Canyon Lake home for years, it was where they started their lives together.“This was my peanut-butter-and-jelly-sandwich house,” he said. “I ate nothing but peanut butter and jellies here, and we worked hard to make this a home.”“We started here from nothing,” Corinne Swientek added. “We had a little heater in the front room and were sleeping on a pallet. We didn’t even have a bed.”
Posted by Sam at 10:27 AM