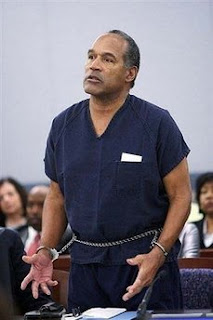 NEW YORK – O.J. Simpson's rambling apology in a Las Vegas courtroom was the last-ditch bid for leniency by a "monster," the family of Ron Goldman said Monday.

"I don't believe for one single second he has an ounce of remorse in his body," Fred Goldman said on NBC's "Today." "He's never apologized for anything that he's horribly done in his life."

Goldman said Simpson's emotional, five-minute plea Friday over his confrontation last year with sports memorabilia dealers was that of "a monster who was simply trying to find a way to get the judge to give him a better deal."

Simpson was sentenced to 9 to 33 years in prison on 12 charges, including kidnapping and armed robbery, in the confrontation over collectibles that the former football star insisted were stolen from him.

Simpson's Oct. 3 conviction with a co-defendant in the Las Vegas case came 13 years to the day after he was cleared in the slaying of Ron Goldman and Simpson's ex-wife, Nicole Brown Simpson.

In a 1997 civil trial, Simpson was found liable for the deaths and ordered to pay a $33.5 million judgment to the victims' families.

Ron Goldman's sister, Kim Goldman, called Simpson's Las Vegas sentencing a "good day for us. ... It's been a long time coming."
Posted by Sam at 9:59 AM