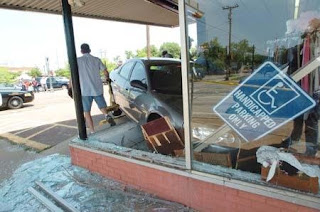 Somebody had too much Christmas cheer apparently

Maybe Santa failed to bring one local man what he wanted for Christmas.
San Antonio Police Officer James Phelan said a 17-year-old borrowed his friend’s white Chevrolet truck and drove it through the window of a discount store on West Avenue about 6:30 a.m. Thursday.
A motorist passing the 99 Cents Only Store at 3025 West Ave. heard a car skidding and several crashes, Phelan said. The motorist turned around, pulling into the store’s parking lot just after hearing the last crash.
He called police and waited until they arrived, but never saw anyone leave the crashed truck, Phelan said. Police searched the area but couldn’t find the driver, who faces a charge of criminal mischief.
Officials weren’t sure if any merchandise was missing, but estimated that the reckless driver caused about $100,000 in damage.
Posted by Sam at 8:42 AM