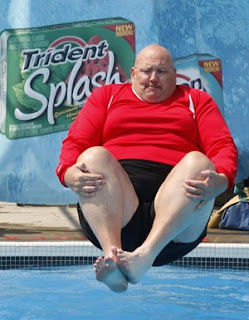 I'm glad it was found and returned.

No place to fence it probably, I mean how many alamo cannonballs can there be floating around today?

Alamo cannonball comes home
By Graeme J Zielinski - Express-News
The brothers Esquivel set out Tuesday for a day of doing “whoop-de-doos” down the mountain biking trails of O.P. Schnabel Park.
The outing ended with a whoop-de-doo of another kind.
Nicos Esquivel, 20, said he came across a black trash bag with what he thought may be a bowling ball from antiquity — or even a human head — but instead turned out to be a purloined part of Gen. Santa Anna's arsenal, a hollow howitzer shell swiped Dec. 21 from the historic Fairmount Hotel.
“I haven't heard of Santa Anna since, like, seventh grade,” he said, flanked by his brother Alex Esquivel, 22, both still in their mountain biking attire Tuesday morning in the lobby of the Fairmount.
The two grinned at the story of the recovery and managed to grin wider still when they contemplated the reward money promised them by the Fairmount's owner, Robert D. Tips.
“It's a great day for San Antonio and Texas history,” said Tips, who said he considered the matter settled, though had been on the verge of escalating his search for the culprit.
Kristin Howsley, managing director of the hotel, said the Fairmount was a bit skeptical when the young men came in with their find — the hotel had already fielded oddball claims seeking the reward, including from a man who claimed he heard a cannonball being fired and a scuba diver who said he'd found it.
The shell had sat under a plastic container sealed by epoxy to a marble countertop in the lobby of the hotel at 401 S. Alamo St. It was originally discovered during a 1985 excavation that was part of moving the hotel building from five blocks away.
The shell was authenticated as kin to the “wall bangers” Santa Anna threw at the Alamo's south walls during the 1836 siege. Through an agreement with the University of Texas at San Antonio, it had sat in the Fairmount's lobby until the heist, suspected as the work of an inebriated member of a company Christmas party.
Whoever placed the missing item near the O.P. Schnabel trail must have read or heard news accounts of the theft — and Tips' offer of a cash reward for its return: On the trash bag was a handwritten note reading, “LOST ARTIFACT” and “CASH REWARD.”
Nicos Esquivel was nonplussed as he slowed his mountain bike to a halt and gave the thing a kick.
“I thought it was a bowling ball, like an old-school, prehistoric bowling ball,” he said.
He balanced the shell in one hand and rode it over to his brother, who had a flat tire on another trail, and the pair of Clark High School graduates carted it downtown.
“We had to dial 411 because we didn't know where the Fairmount was,” said Alex Esquivel, a construction worker.
He said the discovery would lead him to advance his own knowledge of local history because, after all, “I've never even been to the Alamo.”