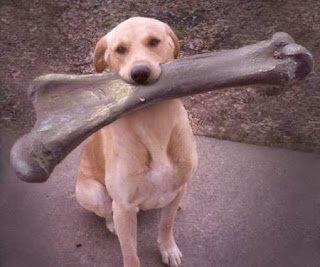 The economy must really be getting tough out there.

Dogs are having to resort to stealing bones.

MURRAY, Utah — A thief remains at large after pulling off a daring heist — in the pet food aisle.
Surveillance video at a supermarket in this Salt Lake City suburb caught a dog shoplifting, KSL-TV reported Wednesday.
The video showed the dog walking in the front door of Smith's Food & Drug in Murray, and heading straight to Aisle 16, the pet food aisle, where it grabbed a bone worth $2.79.
The thief wasn't even perturbed by a face-to-face confrontation with store manager Roger Adamson.
"I looked at him. I said, 'Drop it!' " Adamson said. "He looked at me, and I looked at him, and he ran for the door and away he went, right out the front door."
Posted by Sam at 7:21 AM