Tailgate party at his house 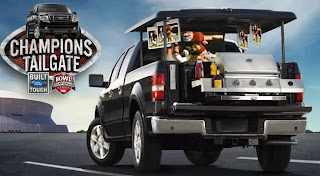 Maybe he wants to host tailgate parties and doesn't own a truck?

Yeah, I know that was a pretty stupid thing to write.

Police say tailgate thief at it again
Marvin Hurst - KENS 5 Eyewitness News
A convicted thief with a record of tailgate thefts has been arrested and charged in the theft of tailgates off trucks at a local middle school.
According to an arrest warrant, security cameras at Rayburn Middle School caught Frank Fonseca, 42, stealing tailgates.
Tailgate thefts don't require any tools and can be done in less than 20 seconds, and the parts can be resold to body shops for as much as $1,000.
In April, Fonseca reportedly went into the school and began talking with a staff member. He went back outside, stole a tailgate from a truck and drove off in a rented vehicle, the arrest warrant alleges. He was also a suspect in another tailgate theft at the school in November.
Northside Independent School District police officers worked with detectives with the San Antonio Police department, who immediately recognized Fonseca from previous tailgate thefts.
He was in Bexar County Jail charged with theft. His bond was set at $10,000.