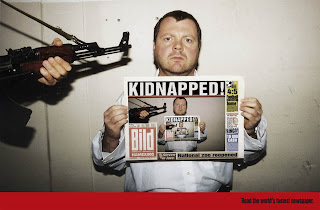 Thank God she was unharmed and returned safely.

I hope this isn't going to get to be a trend like as happens south of the border.

Ex-neighbor allegedly led kidnapping of member of Texas corn dog family
Associated Press
DOUBLE OAK — A man who had once been a neighbor is believed to be the mastermind behind the kidnapping of a woman whose family owns Fletcher's Corny Dogs, a staple of the State Fair of Texas.
Amber Fletcher, 21, was shaken but otherwise unhurt after being rescued following the abduction early Monday by three men from her Denton County home in the town of Double Oak, authorities said.
She was found after one of the men was stopped by officers while Fletcher's mother was meeting him to pay a $100,000 ransom, authorities said.
Adolfo Chavez, 39, had once lived next door to the Fletcher family and sold them a home, said Texas Ranger Tracy Murphree, who assisted Double Oak police in apprehending the suspects,

The Dallas Morning News reported Tuesday in an online story.
Chavez, 39, of Dallas; Candelario Romero, 44, of Justin; and Porras Placido, 37, of Irving were being held Wednesday at the Denton County Jail charged with aggravated kidnapping for ransom or reward, a first-degree felony punishable by up to life in prison.
Bond was set at $200,000 for Chavez and at $250,000 each for Placido and Romero, according to jail records.
All three won't be released because they are suspected of being in the U.S. illegally and a hold was placed on them by U.S. Immigration and Customs Enforcement.
The ordeal began just before 9 a.m. Monday when Amber Fletcher, who had spent the night at her parents' house, returned to her home.
"She was going back home to get some clothes, and two suspects were waiting for her,"
Murphree said. Her hands were bound with duct tape, and she was blindfolded. She then called her mother, Glenda Fletcher, saying she needed $100,000 or the kidnappers would kill her, according to an affidavit.
Glenda Fletcher then called Double Oak police, who learned that Amber Fletcher lived next door to her parents and had been taken.
The kidnappers directed the family to bring them the money and officers agreed to let the mother do it, Murphree said.
He added that sheriff's narcotics officers had the "drop" under surveillance, and that's when they nabbed Chavez near an intersection and he told them where to find Amber Fletcher.
Officers found the woman and two other suspects in a pickup parked at a store several miles from the Fletcher homes.
She later told officials that the men had made a lot of threats but didn't harm her. After she was abducted, she was taken to Romero's home in Justin but spent most of the day with the two men as they drove around, officials said.
Officials believe the suspects, who never received any ransom money, acted alone.
The Fletcher family faced another ordeal Tuesday the funeral of their son. Neil "Dutch" Fletcher III, 50, died Saturday from a long illness, according to an obituary in The Dallas Morning News.
Posted by Sam at 7:25 AM