Stop I have a snowball 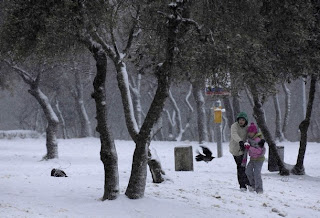 He got that ride he wanted, also three hots and a cot.

I'd call him successful. LOL

A hitchhiker has been arrested for throwing snowballs at passing cars because they wouldn't give him a lift.
Zack Laughlin Kelly, 29, was hitchhiking, but got frustrated that no one would stop for him.
According to police in Oregon in the US, he said he needed a ride home to Beaverton, his home town.
Police said that Kelly had been drinking, but appeared lucid.
Police at first gave him a ride for part of his journey.
But shortly after he was seen on a motorway jumping into traffic and throwing snowballs, so they arrested him.

Kelly was seen walking in the fast lane of a motorway, jumping toward vehicles to try to make them stop.
Police said they found him "marching" back and forth with snowballs in both hands.
He also was walking in the centre of the fast lane, throwing snowballs at vehicles passing him in the slow lane.
He was arrested and charged with disorderly conduct.
He was booked into the Clackamas County Jail, cited and released, pending a court appearance.
Posted by Sam at 8:47 AM