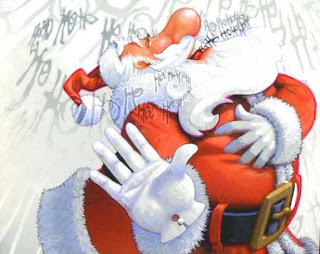 CHICAGO (AP) - The sheriff's office in Chicago has arrested more than 60 fugitives with a net of holiday cheer. Cook County Sheriff Tom Dart said Sunday that the suspects were invited to take a retailers' survey for holiday shoppers at a hotel earlier this month.

Participants who brought along a scratch-off card that was included with the survey were promised at least $500.

Those who showed up were taken into custody. One man who arrived with marijuana in his pocket was charged with possession on top of his previous charges.

The fugitives had warrants for crimes including forgery and aggravated battery.
Posted by Sam at 7:37 AM