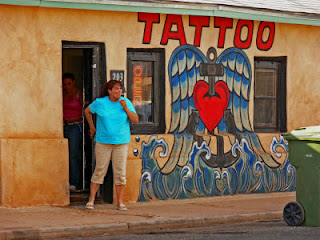 Obviously in that tattoo parlor the customers aren't always right.

Good job SAPD in catching the defendant and good luck in getting any others.

A capital murder suspect wanted in the slayings of two people last week on the Northeast Side has been arrested. More arrests could be made in the case. Police arrested 24-year-old Juan Gomez just before 1 a.m. in a house on Lennon Avenue.

According to police, Gomez shot and killed two men who came to the tattoo parlor where he worked in the 3900 block of Interstate 10 East on Thursday night.

The victims, Steven Bustamante and Juan Alvarez, were slain at the tattoo shop then dumped in the 6000 block of Clematis Trail. Two plumbers discovered the bodies.

Investigators said the slayings were drug related. One of the victim's vehicles was recovered at an H-E-B in the 6500 block of FM 78.
Posted by Sam at 7:15 AM