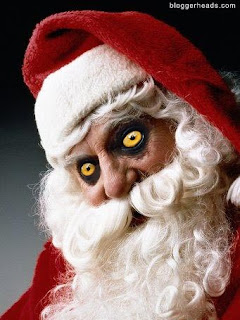 It never stops does it?

Even on, for some, as sacred a time as Christmas Eve, when we all, Christians, Jews, Muslims, Buddhists, Sikhs, believers and non-believers as well, strive for "Peace on Earth and Goodwill towards Men". However, some don't, some kill, without mercy, without rhyme or reason to some, they kill.

May God bring peace to the victims and their families.

LOS ANGELES, California (CNN) -- Dressed as Santa, Bruce Jeffrey Pardo walked up to his ex-in-law's home in Covina, California, on Christmas Eve and knocked on the door.

Bruce Jeffrey Pardo was sought for a Christmas party shooting before taking his own life, police said.
An 8-year-old girl, elated to see Santa, ran toward the door.
That's when, police say, Pardo lifted a gun and shot her in the face.
Pardo, 45, with a gun in one hand and a wrapped present in the other, began shooting indiscriminately, police said at a news conference Thursday.
He sprayed the living room with bullets. Nearly 25 friends and family members were at the home for an annual Christmas party. Some ran, some took cover under furniture, some broke windows to try and escape -- one woman jumped from the second-story of the home, police said.
Neighbors heard gunfire and called 911 shortly before 11:30 p.m. Police said they arrived within three minutes to find the home engulfed in flames.
It took nearly two hours for firefighters to put the fire out.
Even before it was safe to search the home, police saw three dead bodies in the home. A later search found three more bodies.
Police said they have not accounted for three others: Pardo's ex-mother-in-law, ex-father-in-law and ex-wife -- whom he recently divorced. The 8-year-old girl, whose injuries indicate the bullet went straight through her face, is recovering at a hospital in Los Angeles, police said. A 16-year-old with a gunshot wound, and the woman who jumped out the window, were also being treated at the hospital.
Police believe after Pardo stopped shooting, he took out his wrapped gift, which was actually a home-made device used to spread fire, and used it to set the house ablaze. Covina Police Department Lt. Pat Buchanan said the device was "something we have never seen before." Covina Police Chief Kim Raney described it as a pressurized tank attached to another tank filled with accelerant.
Police believe after Pardo set fire to the home, he changed out of his Santa outfit into plain clothes, went to another relative's home in the nearby Sylmar area and committed suicide.
Authorities positively identified Pardo's body, said Buchanan.
Police have not released the identities of any of the victims.
At the news conference Ed Winter, assistant chief Los Angeles County coroner, said the recovered bodies were "severely burned and charred," making it necessary to use dental and medical records and X-rays to establish identities.
The intense fire caused the top floor of the two-story house to collapse onto the first floor, according to Winter.
Raney said Pardo's ex-in-laws regularly have a party Christmas Eve and one neighbor always visits dressed as Santa. This year, that neighbor was away, police said.
Police suggested marital problems as a possible motive for the attack and said they believe

Pardo and his wife of one year finally settled a contentious divorce last week.
Authorities said Pardo's name was given to them by people who were at the party.
Police also said they recovered multiple weapons from inside the house.
Posted by Sam at 8:52 PM