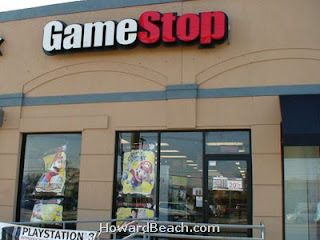 I guess the deep discounts aren't enough for some.

They needed a five-fingered discount.

Be careful; this guy had a gun at both robberies and shot into the floor.

Police searching for game store robber
By Brian Chasnoff - Express-News
A man robbed two video game stores in the span of about 30 minutes over the weekend on the far West Side, according to police reports.
The assailant fired a gunshot at the floor in both robberies, but no one was injured. No arrests had been made as of Sunday.
A man posing as a customer walked into a GameStop in the 6500 block of West Loop 1604 North around 7:15 p.m. Saturday.
He ordered customers to the back of the store and fired a gunshot into the floor before collecting an unknown amount of cash and some video games and systems.
About 20 minutes later, a man entered another GameStop in the 11400 block of Bandera Road about five miles away and fired a gunshot into the floor, this time next to someone’s head.
He made off with some cash before fleeing.
“It was determined that he was the same (person) who robbed the (other) GameStop,” a police report said.
Posted by Sam at 7:06 AM