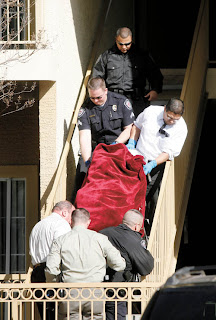 There seems to have been a rash of these lately.

I wonder if the economy is a proximate cause of some of this increase.

Police find two dead in apartment
By Scott Sticker Herald-Zeitung
In the early morning hours Tuesday, police responding to multiple 911 calls of a disturbance forced entry to room 417 at Millbridge Apartments at 1045 Sanger Ave., where they found two bodies at a scene that police believe may be a murder-suicide. Police refused to release the names of the bodies Tuesday, but neighbors at the scene and family friends identified the resident as 48-year-old SuAnne Childress. The other person was identified as SuAnne’s husband, 53-year-old Chris Childress, by his co-worker and friend.

The Childresses were still married, but had been recently separated, according to neighbors and family friends. Police received at least two 911 calls reporting a disturbance from the apartments around 8:30 a.m. Tuesday, police spokesman Lt. Michael Penshorn said, but there were no gunshots mentioned in any calls.

When officers arrived, Penshorn said they found the apartment locked and had to force entry. Inside, they discovered SuAnne and Chris Childress dead with gunshot wounds from a large-caliber handgun. Susie Wiley, who lives under apartment 417, said she was awakened by the commotion.“There was a really loud banging noise for a long time,” Wiley said. “I heard someone shouting near my window, but I didn’t know what was going on. She (SuAnne Childress) had only moved in about a month ago.”Although SuAnne Childress, a Realtor in New Braunfels, had only lived in the complex for about a month, one neighbor, Neil Smith, said he got to know her well.“She was a really nice lady,” Smith said, recounting a time she had baked cookies and invited him over to have some. “She was very friendly and a great woman.”

Greg Goodman, who had worked closely with Chris Childress, a home builder, for a year, said the news was hard for him to take.“I knew Chris Childress to be an outstanding man with good moral standing,” Goodman said.He said Chris Childress had spent much time talking about his separation and seemed calm with the situation.“I know it hit him pretty hard, but he seemed OK,” Goodman said. “He was seeing a psychologist.”

Penshorn said Justice of the Peace Diana Guerrero ordered autopsies through Travis County Medical Examiners Office, the results of which are still pending.
Posted by Sam at 7:49 AM