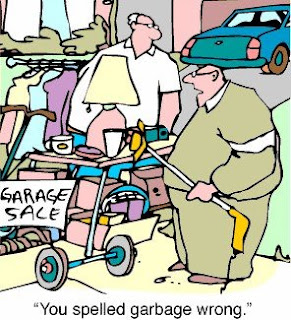 What a great way to raise money.

Sell everything at a garage sale.

Unfortunately for them they didn't own the items they sold.

NATCHEZ, Miss. -- A garage sale from a Natchez home gave a couple enough money to move to Louisiana.
One catch, they didn't own anything they sold.
Police say when Jerry and Teresa Dyess moved out of their fully furnished rental home in March, they sold everything at a garage sale. The owner of the house filed a complaint.

The couple's names were placed on the National Crime Information Center.
When Teresa Dyess was stopped Monday on a traffic violation in Bossier City, La., she was arrested on a grand larceny warrant from Natchez. Jerry Dyess was arrested when he came to bail Teresa Dyess out.
Both were being held in the Natchez jail on $7,500 bond each pending an initial court appearance.
Posted by Sam at 7:10 AM