Surprises for her clients 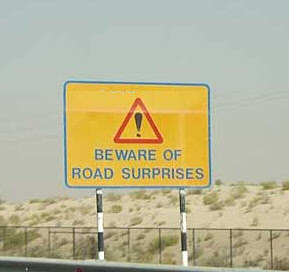 Yes, you read right.....
HUNDREDS of her clients are in jeopardy, facing arrests, jailing and perhaps even license suspensions.

Lawyer accused of running a ticket-dismissal scam
By Guillermo Contreras - Express-News
A former San Antonio assistant city attorney fired in 2003 is accused of putting hundreds of her clients in a bind.
The State Bar of Texas' disciplinary arm wants to take the rare step of immediately suspending lawyer Diana Minella over allegations that she took money to defend people who got traffic tickets, then left them hanging.
Minella, court records said, sent out thousands of solicitation letters telling people she would represent them for fees below the cost of any traffic fine, and would help them avoid having to appear in court and other inconveniences involved in resolving the ticket.
Her actions may have resulted in San Antonio's municipal court issuing arrest warrants for hundreds of her clients, the Office of Chief Disciplinary Counsel said in court paperwork it filed Monday in Bexar County seeking to suspend Minella. Out of 299 proposed disciplinary actions against lawyers in Texas in the past two years, the State Bar has sought 11 interim suspensions, the State Bar said.
“The volume of citizens with cases that should have been disposed of by Minella, and their resulting appearances and complaints before the municipal courts, have substantially burdened the municipal court system, judges and staff,” the disciplinary body wrote. “Minella's clients may face, without their knowledge or any fault of their own, arrest and incarceration ... causing irreparable harm to those clients as well as posing a potential burden to law enforcement officers responsible for making those arrests.”
Minella did not return calls seeking comment.
A hearing on the State Bar's request is scheduled for 9 a.m. Tuesday before a presiding judge in the Bexar County Courthouse. Others with complaints can contact the State Bar at (800) 932-1900, the State Bar said.
Minella was licensed in 1998 after getting her law degree from Texas Wesleyan University. As an assistant city attorney early this decade, she acted as a municipal prosecutor, but was terminated in 2003 because she took part-time work as a municipal judge for the city of Live Oak. She sued the city of San Antonio over her firing, and lost.
Posted by Sam at 7:07 AM