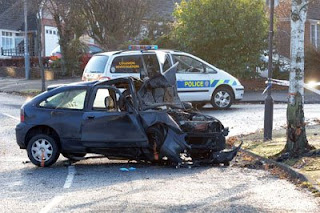 People killed, Lives ruined, families left bereft, is it worth it to have that drink or drug?

I know we are awaiting the toxicologist's report but I will go out on a limb here and say, from the reports in the papers that it would appear drinking or drugs were involved with the driver of the green Pontiac and played a part in this Christmas Day tragedy.

If you want to call me an asshole for making that assumption before the results are in please be my guest. I'll take the heat.

Christmas wreck kills Canyon High student
By Scott Sticker
Three people, including a Canyon High School student, were killed Christmas morning in a head-on collision on Loop 1604 just south of Interstate 10 near San Antonio.The accident, which authorities say was caused by an errant driver who crossed over into oncoming traffic, also left two others — including another Canyon High student — in critical condition.

Gabino Sagahon Martinez, 19, was driving a green Pontiac Grand Prix and collided with a red Buick sedan driven by 19-year-old Brian Marcus Palmer, officials with the Bexar County Sheriff’s Office said Friday. There were three female passengers in the Buick, two of whom died at the scene, officials said.

The Bexar County Sheriff’s Office identified one of the fatalities as Kimberly D. Larson, 35, from Schertz.Leslie Valdez, an 18-year-old junior at Canyon High School, was ejected from the car and also died at the scene, Bexar sheriff’s officials said.Palmer and the third passenger, 16-year-old Canyon High School freshman Mary Crisp, were transported by Airlife to University Hospital in San Antonio, where they were listed in critical condition late Friday, officials said.“This is really tragic,” Comal Independent School District spokeswoman Kari Hutchison said Friday. “All our thoughts and prayers go to the families involved.”Martinez was transported to Brooke Army Medical Center, where sheriff’s officials said he later died on the operating table.

At 10:45 a.m. and 10:47 a.m., patrol deputies received complaints from witnesses who called in to report an erratic driver in a Green Pontiac, officials said. The second caller said the car had crossed the median and was driving on the wrong side of traffic.Minutes later, at 10:51 a.m., officials said deputies called in a head-on crash and fire on Loop 1604 about two miles south of Interstate 10. Witnesses on the scene confirmed the car involved was the same Green Pontiac they had reported, sheriff’s officials said.

As of Friday evening, officials said they did not know why Martinez was driving erratically or why he had crossed the median into oncoming traffic. Bexar County investigators said they are awaiting the results of the toxicology from Martinez’s blood to see if alcohol or drugs were present.
Posted by Sam at 10:15 AM