The unkindest cut of all 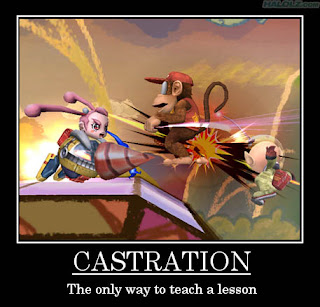 Man o' Law loves his Father in Law and his Mother in Law.

Even his ex-in Laws too. (Just in case)

Police say Eichman paid 34-year-old Charles Pernot $1,200 to beat up the victim and even offered up a bonus if Pernot cut off the victim's genitals."He offered or suggested he use a high power rifle and he said that if you castrate him, there will be a bonus in that for you, an additional $3,000," Corporal Trinidad Navarro said.

Investigators said Eichman even wanted his ex-son-in-law's genitals brought to him. Police said Pernot attacked the 44-year-old victim on December 11 in the stairwell of his apartment by striking him in the face and demanding money during the assault. Pernot fled the scene when the victim began to yell for help."The next day, our victim receives a phone call from the person saying he's the assailant, he's the one who was hired essentially to beat him up," Navarro said. "And he had some information that somebody that the victim knew wanted him hurt."

Navarro said the assailant told the victim that if he wanted the information, he would have to pay $500."So they agree to meet in a public place and it's at that point he hears the conversation on this person's cell phone and recognizing the voice as his ex-father-in-law," Navarro said.

Pernot was charged with attempted robbery, attempted burglary and conspiracy.Eichman was arrested late Saturday and charged with one count of criminal solicitation. He has been arraigned and released after posting a $500 secured bail.
Posted by Sam at 7:30 AM