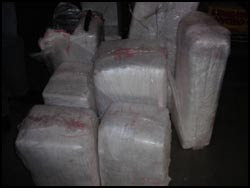 HOLDEN, LA (WAFB) - A refrigerator truck driver hauling frozen vegetables and a history-making stash of contraband was given a heavy prison sentence.
Last October, state police found a stash of meth in the 18-wheeler.
The man driving the load, Francisco Zamora Villa of Texas, was recently sentenced to 15 years in jail without probation or parole.
He had $23 million worth of meth hidden in that load.
The bust set a record as being the biggest nationwide. It happened on I-12 near Holden.
Posted by Sam at 7:05 PM