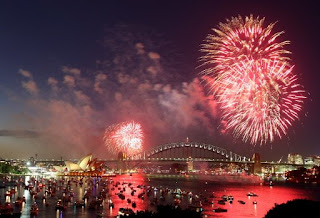 Happy new Year from the Man o' Law family to yours.

May you have a peaceful and safe New Year.

A record crowd of up to 1.5 million people kicked off global New Year celebrations with a fireworks extravaganza over Sydney's iconic harbour and Opera House Thursday.
Never-before-seen lightning, thunder and rain effects topped the multimillion dollar pyrotechnics show, traditionally centred on the city's world-famous Harbour Bridge.
"It's probably 30 percent bigger on the bridge alone than what it's been in previous years," said fireworks director Fortunato Foti. "Personally, I don't think you can have too many fireworks. The more the better."
Sydney was the first major city in the world to see in the New Year, but was beaten to midnight by two hours by New Zealand, which staged a dramatic fireworks display from Auckland's Sky Tower.
Australian organisers provided the largest display ever staged in Sydney, with 5,000 kilograms (11,000 pounds) of shells, comets and individual effects dazzling spectators on a perfect summer's evening.
With almost double the bang of last year, the show cost an estimated five million dollars (3.43 million US).
Thousands of the city's four million residents queued for harbourside spots some 12 hours before the main event, as plain-clothes and uniformed police flooded the central business district.
More than two thousand officers were on duty, with police warning against alcohol abuse and loutish behaviour in a nation famed for its drinking culture.
"New Year's Eve is for everybody, and our role in policing an event like this is to ensure that it's not hijacked by the drunken yobbos (louts)," said Police Commissioner Andrew Scipione.
Revellers were treated to a preview of the main fireworks event in a 9.00pm show for families with young children.
"It's great for the kids, a lot of fun," said Margaret Atkins, who attended with her children aged two and 21 months.
"They were really good, probably the best fireworks I have ever seen and the atmosphere was really lovely," said Dani Rogers, 26, visiting from Brisbane.
Briton Jessica Williams, 29, said New Year's Eve in Sydney was world renowned.
"Coming from overseas you've kind of got to do the whole Sydney and fireworks thing," she said. "It was a great experience."
Posted by Sam at 8:19 AM