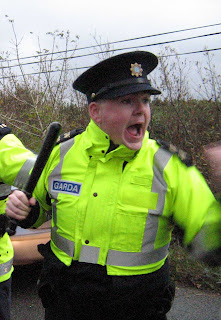 Not a good scene.

Kudos to SAPD for having a tighter standard these days on family violence matters.

Officer charged with assault in bar incident
By Eva Ruth Moravec - Express-News
A San Antonio police officer assigned to the downtown bicycle patrol has been placed on administrative duty after being arrested on charges of assaulting an ex-girlfriend, according to police.
Police spokesman Gabe Trevino said at a news conference that Officer Rory Rogers went to a bar in the 1900 block of Stone Oak Parkway early Friday while he was off-duty and encountered his ex-girlfriend, a 21-year-old San Antonian, who was on the dance floor with friends.
“Suddenly, she turned around, and he was there,” Trevino said.
Rogers, a five-year veteran of the force, pushed the woman to the floor, where she cut herself on broken glass, then pushed her once more as she was getting up, Trevino said. Rogers then fled the bar, he said.
Trevino said he wasn't sure if Rogers had a history of violence, but according to a police report, the victim said she and Rogers used to “play-fight and that it would sometimes get out of hand.”
Rogers turned himself in early Saturday morning, just one day after the woman filed the complaint.
Although Rogers didn't admit to the crime, police were able to arrest him because of a tighter domestic violence policy that was adopted in January 2007 requiring officers to secure arrest warrants immediately for most family violence suspects.
Several witness accounts were identical to the ex-girlfriend's story, Trevino said, giving police probable cause for an arrest warrant.
Rogers posted bail and was released, Trevino said. He will remain on administrative duty during criminal and administrative investigations.
Posted by Sam at 8:00 AM