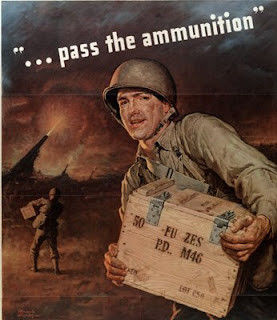 You need food for the guns, No?

Ammo smuggling suspect is arrested
Todd Bensman - Express-News
A Laredo man who bought and sold guns that were later found at the scene of a deadly cartel shootout with police in central Mexico has been arrested on charges of smuggling ammunition into that country.
Raúl Alvarez Jr., who was interviewed as part of an Express-News investigation of gunrunning, was in federal custody Thursday in lieu of $100,000 bond.
He was arrested Monday at the one of the international bridges in Laredo as he and a female companion tried to cross into Nuevo Laredo, Mexico, in a 2000 Ford Expedition.
U.S. Customs and Border Protection officers conducting inspections of southbound traffic questioned Alvarez, and he acted nervously, according to a criminal complaint affidavit filed against him.
Alvarez, 29, and his companion told officers they had no weapons or ammunition. But when the vehicle was pulled aside for further inspection, officers found a compartment in the rear passenger quarter panel that hid .303-caliber ammunition, the affidavit said.
After opening the compartment, the officers found 282 rounds of assorted ammunition, three pistol magazines, eight rifle magazines and a rifle bipod, the affidavit said.
When officers tried to question him, he invoked his right to an attorney, something he did in the past while under investigation by the U.S. Bureau of Alcohol, Tobacco, Firearms and Explosives. Early last year, agents tracing the path of guns recovered at the scene of the murder of four Aguascalientes police officers in Mexico found their way to Alvarez, who refused to be interviewed. He was not charged.
Two months ago, Alvarez agreed to talk to the Express-News about how he came to buy and then resell weapons particularly favored by cartel gunmen. Among those he bought from a Laredo gun store and found at the murder scene in Mexico were a Beretta M9 and Walther G22 assault-style rifle.
In two interviews, Alvarez insisted he was not involved in arms trafficking and had bought those particular weapons only once. He said he happened to sell them to a stranger at a Laredo shooting range who offered him $5,000 cash a time Alvarez was trying to raise money to buy a house. He said he hadn't bought other weapons since then.
“I needed the money, so he gave me money,” Alvarez told the Express-News. “I can't read minds like a psychic. If I knew he was going to use guns to get me in trouble, I wouldn't have sold them.”
In the ammunition case, Alvarez chose not to challenge whether officers had probable cause to arrest him. Prosecutors are preparing the case for a grand jury, court records show.
Posted by Sam at 7:26 AM