Wishing a safe journey and deployment for a new DA 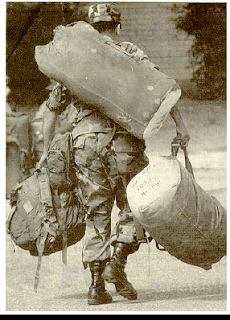 This should not present too big a problem. If he remains deployed in Iraq until June he should be able to hire an assistant DA to cover the job until his return.

Also this possibility was something that the electorate was aware of at the time of his election.

Be safe Captain Kindred until your final return.

South Texas D.A.’s Iraq deployment raises questions
By Zeke MacCormack - Express-News
Hondo lawyer Daniel Kindred, who went to Iraq with the Army Reserves last spring before winning election as district attorney for the 38th judicial district, is slated to return and be sworn in next week.
After that, it's unclear whether he'll return to military duty overseas and, if so, how the district attorney's duties will be performed in Medina, Uvalde and Real counties.
Kindred declined to answer questions on the subject via email, saying, “I will be happy to speak with you in January after I return from Iraq.”
An Army Reserve captain with the judge advocate general's corps, Kindred won an April runoff against Tony Reyes for the Republican nomination. He was unopposed in the November election to succeed Democrat Tony Hackebeil.
His brother, Department of Public Safety Trooper Donald Kindred, said Daniel Kindred is “doing great” and “ready to come home,” but didn't dispute reports that the prosecutor-elect's deployment isn't over.
“I really don't know what's going to happen on that,” he said. “He may have to go back.”
Hackebeil said he has not been in contact with his successor but has heard the rumors — including one that Kindred will stay only 10 days after taking office before being redeployed, possibly until June.
“I get asked that question at least half a dozen times a week: ‘What's going to happen if the district attorney who is elected is not available to fulfill the duties?' And my answer is, ‘I don't know,'” said Hackebeil, the district attorney since 1994.
There's no requirement that a district attorney be physically present, just that the job gets done, he added.
“He simply has to make sure that someone is available to do the job,” Hackebeil said of Kindred.
He said Kindred has reportedly hired an office staff and investigator, but he has not heard of anyone being chosen to fill the long-vacant post of assistant district attorney.
The incoming judge in the 38th judicial district, Camile Glasscock DuBose, said she also has heard the rumors but hasn't talked to Kindred.
“I do know he will be here Dec. 31 and he will meet with me, and I have every confidence that if he can't be available he'll make sure the office is run in his absence,” said DuBose, who beat Democrat Tom Cate in November in the race to succeed state District Judge Mickey Pennington.
“Right now my main concern is that he gets back here safely,” DuBose, of Uvalde, said last week.
Kindred, who became a lawyer after a 20-year law enforcement
Posted by Sam at 6:33 AM