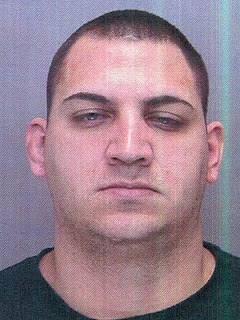 Man, don't talk during a movie!

Doesn't everyone know that?

They will now perhaps.

BTW the defendant looks like a mean cuss don't he?

Phila. man shot because family talked during movie
By Barbara Boyer
INQUIRER STAFF WRITER
A South Philadelphia man enraged because a father and son were talking during a Christmas showing of The Curious Case of Benjamin Button took care of the situation when he pulled a .380-caliber gun and shot the father, police said.
James Joseph Cialella Jr., 29, of the 1900 block of Hollywood Street is charged with attempted murder, aggravated assault, and weapons violations.
"It's truly frightening when you see something like this evolve into such violence," said police spokesman Lt. Frank Vanore.
Police were called to the Riverview Theatre in the 1400 block of Columbus Boulevard about 9:30 p.m. where the gunshot victim, a Philadelphia man who was not identified, told police a man sitting near him told his family to be quiet and threw popcorn at his son.
After exchanging words, Vanore said Cialella allegedly got out of his seat to confront the family when the father got up to protect them. That's when the victim was shot once in the left arm, sending others in the theatre running to safety.
Cialella then sat down to watch the movie. Police arrived a short time later and arrested Cialella and confiscated his weapon, Vanore said.
Posted by Sam at 10:45 AM