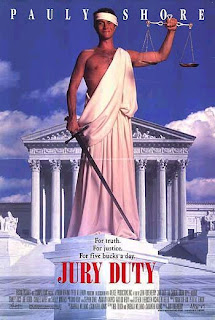 Don't get into a "pissing" contest with a federal Judge.

Don't break Rule Number One when you are a member of a now reviled industry, the mortgage business, which has to be bailed out at tax-payer expense, and complain a) the government created the mess and b) you're too important at your business and have to be there to keep it going.

Juror blasts court and country, but judge won't budge
By Guillermo Contreras - Express-News
A jury was picked Thursday for the trial of a former San Antonio doctor charged with tax evasion, but Philip M. Salemi isn't on the panel.
Salemi, who owns Town & Country Mortgage, is waging a battle with federal court over one of America's basic civic duties. In an unusual move, he wrote a scathing letter to the court complaining that he had to report for jury duty and lambasted the system.
Now, a judge has threatened him with contempt if he does not report for duty in January.
In his letter and in a telephone interview, Salemi said he took exception with having to call the federal courthouse on Sunday nights during November to see if he was required to report for jury duty, which pays $40 a day, plus mileage.
He also said took umbrage at having to write to the court to explain why he forgot to call in one of those Sundays (which preceded a day he actually had to report). He said his small business depends on him, and he does not want it to become one of the many failed mortgage companies.
“In order for my company not to be part of the carnage that MY GOVERNMENT helped create, I am not going to be able to serve on juries now or anytime in the foreseeable future,” Salemi wrote Dec. 5 to Sheila Hunter, jury clerk for federal court in San Antonio. “I have no other focus in my life at this point other than to make sure that nothing happens to those jobs, employees and their families.”
He also said jurors should not be citizens picked randomly but court employees with knowledge of the law and expertise in the topic of a particular trial.
“Most jurors I have seen interviewed after trials don't impress me with having enough sense to get out of the rain, much less determine the guilt or innocence of someone on trial for what is undoubtedly a critically important matter to have gotten to that point.”
Salemi also questioned why the courts don't draw potential jurors from the rolls of the unemployed instead of registered voters — the way he was picked.
He post-scripted his letter with this: “Michelle Obama may be proud of her country for the first time in her life, but frankly, for the first time in my life, I am totally disgusted with it.”
U.S. District Judge Fred Biery said in a Dec. 8 order that it is not too much to ask Salemi for some of his time.
“Should Mr. Salemi choose not to be part of the social fabric and contract of the United States of America, there are many other countries to which he can freely move which do not require citizenship through jury service ... (like) Mexico, Cuba, North and South Korea and the Republic of China,” Biery wrote. “Should Mr. Salemi choose to be part of the American experiment in self-government and its social contract, and to purge himself of any possibility of going to jail for contempt of court, Mr. Salemi is ORDERED to participate in jury service for the month of January 2009.”
Salemi said he stood by his principles but acknowledged that the court could “force me to serve, I guess.”
“They'll probably make an example out of me,” he said.
Meanwhile, the jury picked Thursday will begin hearing arguments Monday in the trial of Daniel Luczkow and his wife, Mary, who are charged with hiding more than $656,000 from the Internal Revenue Service in an offshore tax-shelter investment scheme.
Posted by Sam at 6:54 AM