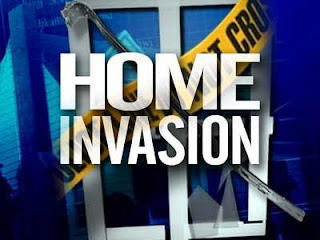 I hope they find these vatos soon.

No arrests in home invasion, shooting
By Brian Chasnoff - Express-News
A man suffered a gunshot wound to the back after two men forced their way into a West Side home over the weekend.
Police spokesman Joe Rios said the aggravated assault in the 2600 block of Chihuahua Street was not a random attack, although a motive was unclear.
“They were looking for someone who might’ve been there,” Rios said.
Jose Garcia, 26, was taken to University Hospital in fair condition.
Garcia told police he heard a knock at the door around 11:15 p.m. Saturday.
He unlocked the door, and a man with a pistol forced his way inside.
Another man rushed inside and struggled with another occupant of the house, a police report said.
A gunshot rang out, and both assailants fled in a blue pickup, the report said. No arrests had been made as of Sunday.
Posted by Sam at 7:03 AM