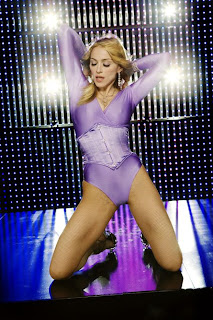 I guess its not a bad payoff for being married to Madonna for 8 years.

The radio this morning said it equates to approximately $24,000.00 for each day he was married to her.
(I would have taken much less.)

LONDON (AP) - Madonna has settled her divorce with ex-husband Guy Ritchie for at least 50 million pounds ($76 million), the singer's spokeswoman said Monday.
Liz Rosenberg told The Associated Press the settlement was in the range of 50 million to 60 million pounds ($76 million to $92 million) as part of their divorce agreement, a figure she said included the value of the couple's country home, Ashcombe House in western England.
Rosenberg said the couple's west London pub—the Punchbowl—would also remain with Ritchie.
A representative for the British filmmaker declined comment.
The couple were reportedly worth some $525 million, the vast majority of which belonged to Madonna. Ritchie had an estimated $35 million fortune.
Their multimillion pound (dollar) settlement is about twice the size paid out in Britain's latest high-profile celebrity divorce, that of former Beatle Paul McCartney and model Heather Mills.
"I'd assume it's one of the largest payouts ever in a divorce settlement," Rosenberg said.
The biggest contested divorce settlement in English history was the 48 million pounds (about $90 million at the time) insurance tycoon John Charman was ordered to pay his ex-wife in 2006.
But U.K.-based entertainment lawyer Ambi Sitham said it made sense for Madonna to divest herself of her British property.
"She's got no interest in remaining here," Sitham said. "She's relocating and moving back to New York. It's money she's already paid out—what is she going to do, try to sell the houses in a flagging market?"
Rosenberg said that while the financial component of the settlement had been worked out, custodial arrangements for the couple's children have yet to be finalized.
Madonna and Ritchie, director of "Snatch" and "Lock, Stock and Two Smoking Barrels," have two children, Rocco, 8, and David Banda, 3, who was adopted from Malawi in 2006. The singer has a 12-year-old daughter, Lourdes, from a previous relationship with personal trainer Carlos Leon.
The pair were married in a lavish ceremony in December 2000 at Skibo Castle in the Scottish Highlands.
But in recent years, reports began to accumulate that their relationship was on the rocks. Over the summer, Madonna was linked—unfairly, she said—to the breakup of New York Yankee Alex Rodriguez and his wife, Cynthia.
Madonna and Ritchie announced their split in October after months of tabloid speculation. They were granted a preliminary divorce decree on Nov. 21 and the split is expected to become final in January.
Madonna kicked off her latest tour—"Sticky and Sweet"—in Cardiff, Wales, on Aug. 23.

Madonna, Lourdes and Rocco are currently in Rio de Janeiro, Brazil where the singer gave a concert Sunday night before 70,000 fans at the famed Maracana soccer stadium.
She has another concert in Rio later Monday, and then plays in Sao Paulo's Morumbi stadium Thursday, Saturday and Sunday nights.
Posted by Sam at 7:41 AM