The Grinch didn't steal their Christmas 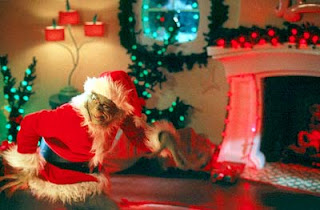 Boy, talk about a major screw-up.

Many thanks to the help of the resourceful city employees who relocated the venue to an outdoor plaza next to the building and the party went on.

CPS should refund the money to the group who had paid for the use of the building.

Locked doors greet disabled at Christmas party
By Todd Bensman - Express-News
A grinch — or someone on the order of very, very forgetful — stole a Christmas dance for hundreds of disabled San Antonio residents Sunday. But in the end, people whose disabilities have taught them to adapt did just that, with aplomb.
As it has for each of the past 10 years, the advocacy group Door in the Wall Inc. had spent months carefully planning this year's Therapeutic Recreation Country Christmas Dance. The popular event in the handicap-friendly La Villita Assembly Building downtown was to be replete with home cooking in the big kitchen, Santa Claus, face-painting tables, door prizes and a live band.
But when the packed passenger buses showed up for the festivities, scheduled to be held from 1 to 6 p.m., the would-be revelers found the doors chained and locked. About 400 people, many of them in wheelchairs, ended up milling around the chained doors with Santa Claus and band members who had no electricity to plug into — and no bathrooms available.
“Chains are on the door! I really don't know how in the world this could happen,” said Barbara Blair, the group's director. She was clutching a copy of a signed and sealed lease agreement that showed she paid representatives of CPS Energy, which controls the venue, almost $1,000.
“It's just horrible,” she said. “Months and months of planning went into making this an awesome experience. Everyone was just standing around with no place to go.”
To make matters worse, Blair said, no one picked up when she called any of the phone numbers provided by the property's event coordinator. And no one with the city had a spare key.
“No one would answer me when I called the emergency telephone number?” Blair asked, incredulous. “Why would they have an emergency number that goes to nowhere?”
By 2:30 p.m., though, the city's parks and recreation department had finagled a way to let the crowd use an outdoor plaza next door to the chained door.
With the help of city employees, enough tables and chairs to seat hundreds were set up. The band found electricity and started playing, and soon thereafter plates of chili, chips and tamales were working through the happy crowd. Smiles soon outnumbered frowns, despite the unseasonable warmth of the day and limited handicap-accessible bathrooms.
Dick Willett, who belongs to a stroke support group, typified the attitude.
“It's turned into a beautiful picnic in the outdoors, with beautiful women and good food,” he said. “What more could you want?”
It remained unclear why the party was locked out of its venue. By Sunday evening, voice messages left on the phone lines provided by CPS Energy were still unanswered.
Posted by Sam at 6:52 AM